A tribute to my Rotweiler Cubbies I and II 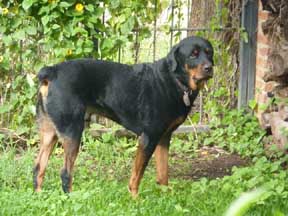 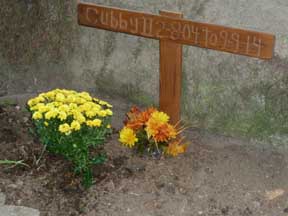 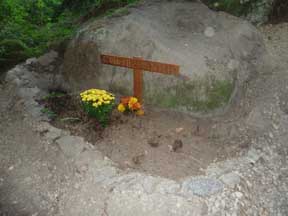 The afterlife and pets in heaven

As I deeply mourn the passing of Cubby II on 9-9-2014, I provide this  tribute to and obituary of my beloved Rottweiler.
I have had quite a few dogs and cats in my lifetime, but none have gotten so deeply into my heart as my two Rottweilers,
Cubby I and Cubby II. Cats are very different than dogs. Cats like loving and affection when they want loving and affection;
not when you want to give it to them. Dogs are there for you anytime and any place. Only dogs give unfailing and unconditional
love. Will there be a Cubby III? Absolutely;  but not until I can first mend so I am not trying to compare a new puppy with Cubby II.
And I will start with an 8 week old puppy as I did with Cubby I. Cubby II was almost 3 months old when we got him after Cubby I
got ran over by the water truck out front, and I was in a very distraught state of mind.  After three weeks of balling it was decided
only a new puppy would maybe start the healing process. This time around we still have Muffy , our white Maltese, who should have another 8-10 years in him if we can take care of him, so replacing Cubby II isn't as critical as was replacing Cubby I.  Muffy is a love himself. I would feel just as badly about losing Muffy. You have to wonder why God gave animals such a short lifespan on earth.

If it is this hard to lose a pet, I can't even imagine how heart breaking it would be to lose a wife or child. Cubby II made it to old
age and end of life alive. Brownie, a German Short Haired pointer I had in 4-H when I was 15 almost did. He was in his last year,
his chocolate brown hair was turning gray, his eyesight was failing, he was getting wobbly in the legs and his hearing had failed.
I was just starting the stages of realizing he wasn't going to be around much longer.  But then the UPS driver came one day,
Brownie laid down in the driveway behind the truck, Brownie didn't hear the truck start, the driver didn't see him and backed over
him. I was extremely distraught but was spared the agony of seeing him wither away to the point I would have had to euthanize him.
I wasn't spared that experience with Cubby II. I couldn't bring myself to put Cubby II down but asked God to take him quickly so
he wouldn't suffer. God honored that request. . There are many books out there offering advice on how to say goodbye at this
stage in the game. None of it is easy if you truly love your pet.

Pets in heaven?
One question you have to ask yourself is, will I ever see my pet again in Heaven? Do our pets have a spirit and do they go to heaven?
Many pastors say no, but many near death experiencers say yes; they did see their pet in heaven. In fact their pet greeted them when they got there. Is that a possibility? An Adventist pastor I stay in touch with lost his pooch about the same time I lost Cubby I. His name is Steve Wohlberg and his website is www.whitehorsemedia.com  I don't agree with adventist theology in some areas but Steve and I have remained in communication over these years. He has written many good books and produced many viedeos on Christianity. His first doggie was replaced by a dog named ReRun just as Cubby I was replaced by Cubby II.
Rerun has since passed away and has been replaced again. He wrote a book entitled  Pets and the Afterlife. I have a copy of the whole book posted at www.detailshere.com/pets-afterlife.htm   We know there are pets in heaven, as the lambs lay with the lions.  Is there
any reason to doubt that the pets we cherished and loved here on earth will not be there for us when we arrive at heaven?  Steve's
book gives us many encouraging words as well as scripture to tell us that may very well be the case. We may very well see our favorite pets and enjoy them in heaven again. The trick is, if they made it to heaven, will you? Study my book online at www.detailshere.com/parachute.htm  to improve your chances of a heavenly destiny at death. Request a free .pdf of that book by emailing me and asking for a copy.

Cubby II was my buddy, as was Cubby I, my companion, he loved to go for rides, especially in the jeep, he loved to go camping,
he loved to go for walks. In 2013 he was approaching ten years old. Rotties only last ten years. He developed a cancerous tumor
on the bottom of his chin in July 2013. It was even bleeding. The vet wanted $3800 to deal with it which we could not afford and they said we would probably lose him anyway.   I used all my knowledge and tools about cancer  to make that tumor go away. This along
with pics is all documented at www.detailshere.com/cubbyschingrowth.htm   It seemed everything I did had worked as the tumor shrank
and healed over. By October 2013 it was completely gone.  But we no longer could afford the $100/bottle ellagiplex I was giving him and I should have continued to give that to him I think.  I will probably never know if old age or cancer sprouting up again internally
killed him.

In April of 2014 we made a camping trip to Waketickeh Creek Club on the Hamma Hamma in the Olympic Mountains and he was
still able to go down and up the long hill to Waketickeh creek from the campground; but he huffed and puffed along with me and
rested a lot the whole way. At home we still did our 1 1/2 mile walk each evening but it was becoming laborious for him. He was
starting to walk funny like his legs weren't supporting him well any longer.

Then he started throwing up his meals and losing weight. Next trip to Waketickeh during July 2014 he couldn't go down to the creek
and I barely got him out on short walks along the road to go #2.  His barfing up his meals continued. He would re eat many of
those. I even fed him smaller meals with small pieces of chicken and meat cut up several times a day. I gave him Greek yogurt
and acidophilus pills and fed him snacks of twinkies and powdered sugar donuts he liked; anything to get food down him as
he was losing weight fast. I bought more ellagiplex powder and loaded it into capsules and snuck them into his food each meal.

By mid August I knew I was losing him. He was spending more and more time on his rug outside by my jeep shop to be with me.
I laid down beside him often and loved him and cried a lot.  We both sensed the end was near. We developed a final closeness
I had never had with another animal; even Cubby I. I didn't have the heart to take him to the vet and have him put down.  I asked
God to take him quickly and not let him suffer.  I didn't know whether internal cancer had again reared it's ugly head, as there were
no external tumors, or his time had simply run out; as it was apparent his systems were shutting down.  I even spent three days
digging his special grave by a huge granite boulder next to the woods I used to play on when I was a child. How an igneous rock
this size came to rest with a hillside of gravel and hardpan from the leftovers of a glacial terminal moraine is an interesting question.
It probably came from a long ways away from when puget sound was carved out by glaciers. There were 20 - 24" fir trees nearby
so I had to cut out several very large roots to get him where I wanted him to go. I also pruned those trees twenty feet up so
sunlight could shine through and warm the flower bed that was planted above him. I also put several wheelbarrow loads of compost
over him  so the daffodil bulbs and holly tree, spearmint plants, ivy,  and a section of mom's old poppy plant that still came up
each year in the flowerbed by the house, would have sufficient sunlight to grow in. The ground around the granite boulder was channeled so rain running off the rock would water the plants.

On Tuesday Sept 9th,2014, I headed off to church to help prepare the Hallowed Grounds meal for the homeless that I do every Tuesday. Cubby was on his rug in front of the Jeep shop as I left looking normal even though I knew he was already on borrowed
time.  Midday Muffy started barking and when my wife Irina came out to find out what all the commotion was about she found Muffy barking over Cubby II in front of the jeep shop.  He had expired. God had answered my prayer and taken him home.
No more suffering on his part. I didn't have to go through the agony of euthanizing him.  We buried him in his freshly dug grave.

On top of him I placed a 1 gal plastic folgers coffee can as a time capsule. On top of the can sticking out of the ground is a core
out of a geyser I got from Yellowstone Park when I was 12 years old. The folgers can contains three pages of pictures of Cubby II, myself, Irina and Muffy. I have given my family instructions that when I die I want to be cremated and my ashes put in a small jar and
that jar placed in the folgers can time capsule on Cubby II's grave. When my wife dies my sons and daughter are instructed to
retrieve that jar and bury it with Irina, if she chooses, wherever she chooses to be buried.

Cubby I    12-05-2002 to 4-22-2004
The loss of Cubby I was an extreme loss to us. He was a perfect dog, perfect personality, very loving. He was originally purchased
out of a Guadalajara newspaper for my wife, Irina. But as it was me who fed him, bathed him, took him for rides, took him for walks;
over time he became daddy's doggie. I still blame myself for his demise as the fence was not yet completed which allowed him
to get out on the road and in the path of the water truck. 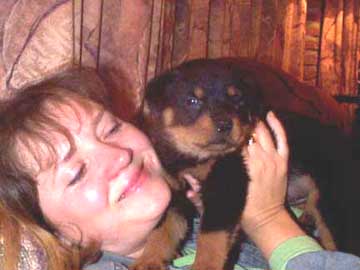 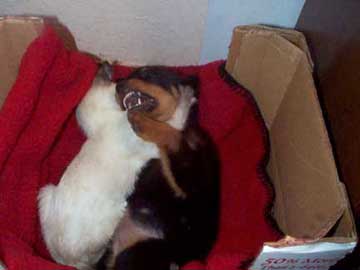 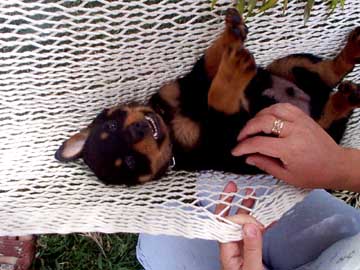 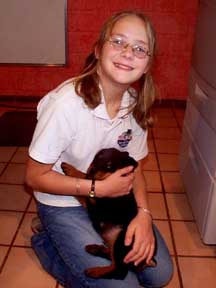 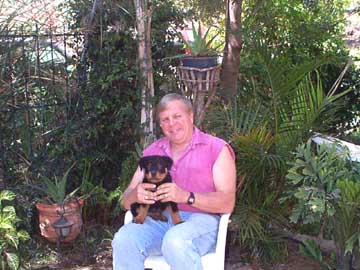 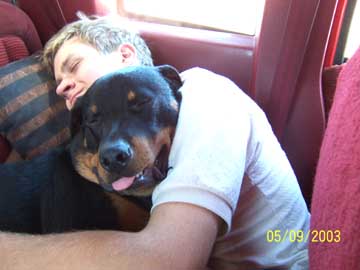 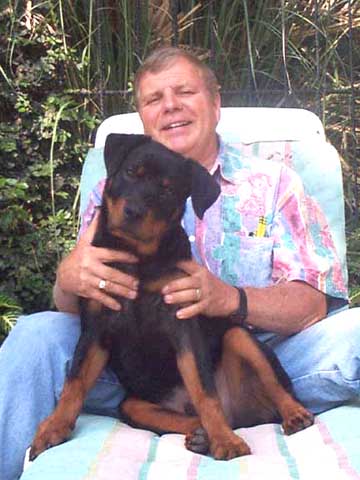 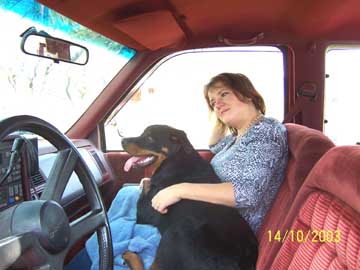 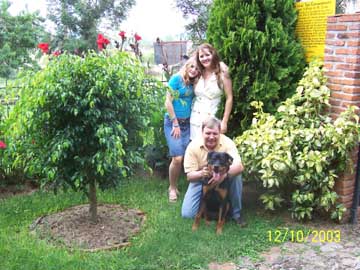 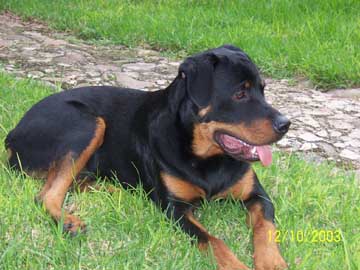 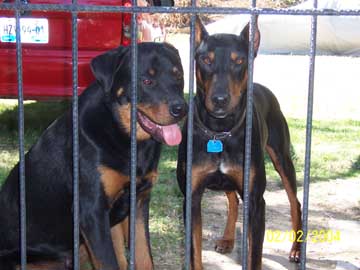 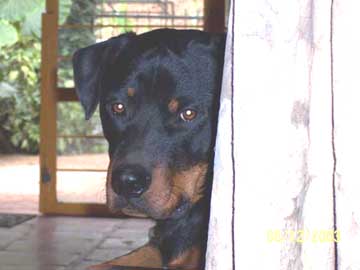 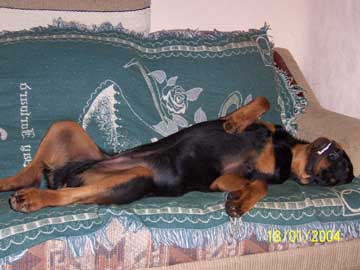 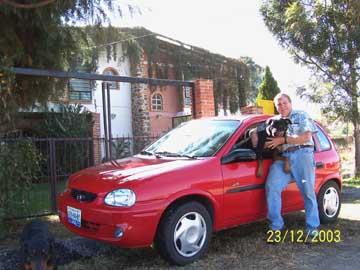 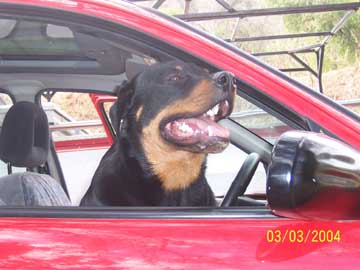 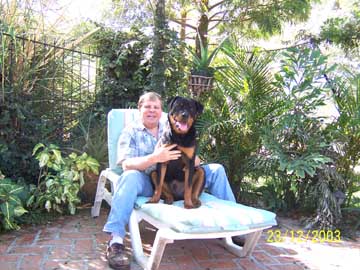 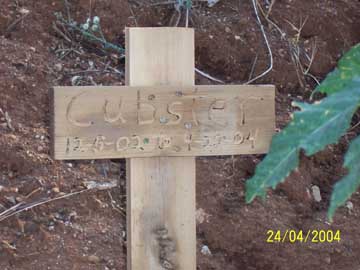