see also http://educate-yourself.org/currentnews.shtml   for many other articles on just what is happening in the US today.
Latest Info On The Microwave Vertical Array
ELF Towers Being Erected Countrywide

[Editor's Note: The info you are about to read was posted today (May 25, 2002) by Don Croft to his Chembuster forum and other chat groups. The explanation for the ELF towers discussed below from the anonymous source makes perfect sense to me. I had already learned from Sterwart Swerdlow that the kickoff date for the NWO takeover was supposed to have been year 2000, but the date was pushed up to 2003 due to unforseen obstacles impeding the agenda; gun control in America being one of them. It's worthwhile to note from the anonymous writer that Kevlar suits, lined with lead, can effectively block these ELF waves and prevent brain entrainment. Don Croft is convinced that the presence of DOR, or Deadly Orgone energy, is necessary for these mind control towers to be effective. Don maintains that an orgone generating device called a Holy Handgrenade can transmute DOR into the more positive, life affirming form of orgone called "OR" by discoverer Wilhelm Reich. Don and his wife feel that removing the DOR component from the environment of an ELF tower, will mitigate the mind control function. He may be right. I can't say for sure, but it's worth your time to at least read about this easy-to-build orgone generator and acquaint yourself with the topic. The numerous testimonials and anecdotes that I've read at Don's Chembuster forum about the HHg makes for fascinating reading. I have seen the effectiveness of another orgone generating device, the Chembuster, to disperse and clear the sky of chemtrails. I can attest, first hand, that the Chembuster can break up chemtrails and return the sky to a normal color of blue.

If you've been looking into the NWO takeover story for any amount of time, you may know by now that negatively orientated aliens, especially the negative Reptillians and negative Sirius B aliens, are the hidden controllers behind the Illuminated humans pushing for the NWO enslavement/genocide agenda. The Rule of Polarity or Duality requires an opposite force in place to offer an alternative choice and so it is that friendly groups have been assisting certain individuals in this harrowing period of our evolution to counter the negative alien agenda. It appears that Don & Carol Croft are recipients of a portion of that positive assistance and this is what accounts for  many of their discoveries and insights. If you take the time to read their Adventures, you will see that higher dimensional entities and friendly aliens have assisted them on more than one occasion. Regardless of whether you accept the alien connection or not, the article posted below by the anonymous source is well worth reading...Ken Adachi] 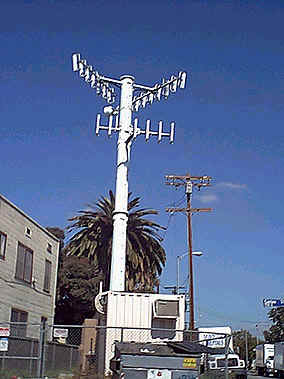 Are you curious about why those new towers are going up in all  populated areas? We've gathered a lot of information to indicate that the arrays are intended for mind control purposes. My wife and I found a way to neutralize them with a simple device called a Holy Handgrenade and have been doing so in recent months in various locations around the country. We place them in an inconspicuous location within effective range of the tower. We often bury them, base down with the pointed end up, to maximize its concealment. If you go to  www.metatech.org, the `chembuster' section has the instructions to build the Holy Handgrenades or "HHg."  I borrowed that term from the movie,  Monty Python's Holy Grail, but I'm dead serious about this work.

There are people in 12 countries now making and deploying HHg's to neutralize these ELF towers, but this is just a start, of course. I figure that if one person in every populated area decides to do this, the whole tower network will be disabled in a short time. The effective range of the device described in Metatech's material is at least a quarter mile, so don't put it close enough where a team of searchers would find it. It's best if the person making and deploying his own HHg's doesn't discuss it with me or many others and keeps their activites to themselves. This will only succeed as a grassroots effort.

Here's some skinny on these towers from a friend of mine who has had access to some crucial inside information. My comments are in squared brackets( [ ] ) He's not fully informed, yet, of what our HHg's can do

The Purpose Behind The Neighborhood ELF Microwave Towers

Sent To Don Croft By an unidentified friendly source
May 23, 2002

Think grid triangulation. Like the old grid paper, put a dot at each corner. expand the box outward. Each level of panel acts also dimensionally (not like 4th, but in 3d space dimensions, don), or to put it another way, pitch, yaw, up, down, right, left, x, y, intensity, duration,  frequency pulse, etc, those kind of dimensions.

The whole damn dumb show was supposed to go down in late 99, but they didn't get people's guns, that big final 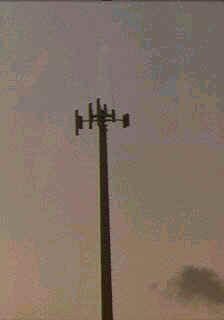 obstacle to fascism. That's  when they hit upon these ELF towers. Tested them in Ventura, Africa, and the Sudan. They had GWEN operational in '92, but it did entire counties and would affect their own people, who have body suits they were (lined with lead-impregnated kevlar- which blocks elf and piggyback freqs.).

So they found out that the little towers, by the tens of thousands,  they could literally aim any energy like a gun to a single home, a given  range area, and so forth. Big places run by FEMA/NORAD run it all from computers. But they can also go remote, with the proper clearance and hookup.  They found out they didn't need to get the guns (that's why the push and schoolyard shootings stopped here; they no longer needed that scare op that worked so well in England, Australia, Germany, ....)

Now...how can you fire a gun or load it, if you are crawling on the ground begging for mercy? If you can imagine the worst abdominable pain there is, then you know how debiliating it is - you simply can't do anything, but lie on the ground and pray for relief  [Editor's Note: this assertion has been corroborated by Al Bielek, Stewart Swerdlow, Col. Fletcher Prouty, and even Major Ed Dames. During the 1991 Gulf War, hundreds of thousands of Iraqi troops spontaneously surrendered without even attempting to fight. It was this very ELF mind control technology which had been applied and rendered them impotent... Ken Adachi].

Then they can clean up entire streets, districts, small towns, enclaves, as needed. They don't need to pulse the whole country at once. Only as they do sweeps would they need to fire the machine up. And it is great for little revolts as they are sure to spring up. You can aim this grid like a net, down to the meter's distance. Got a neighborhood or backwoods community that isn't cow towing the NWO line? Simple, fire up the machine and down they go...as you walk through, kill the ringleaders, disarm the rest, then the lesson is taught to the survivors

These towers ARE very important to their plans this year. THIS IS NOT EVEN A QUESTION.

The French pioneered this technology in the late 70s from Bell Labs. They created a device for crowd control that looks like a big baseball stadium loudspeaker. It fits into the back of a van. Then they'd open the doors, pointing the van at the crowd. I've seen the device.

It operates on a 5 cycle bass wave, elf. Made everyone drop to their knees with stomach nausea. [Carol felt that frequency as we drove by one of the towers, which was operating above the usual 15% capacity, apparently, on a recent trip]

Your towers are the same thing, but with bi-phase polarity freqs that can induce hallucinations, nausea, herpes outbreaks (every organism has its own cellular freq) or whatever they want you to feel that day...horniness, anger, whatever.

Or stupefication...the walking dumb...look around, Don, and tell me what you SEE. Even though our spirit is full of fire and life, it has to, by nature of the 3D prison planet, function through the brain. YOU CAN'T EVADE  THAT FACT AND NO AMOUNT OF METAPHYSICS WHATEVER can change that. I can make you brilliant or stupid, just by inserting a chemical or frequency wave into your brain. The potential of Einstein is within us all - the brain is the GREAT BARRIER REEF to this.

NO AMOUNT OF METAPHYSICS WHATEVER can change that

[I believe that if we have a HHg in our energy field this won't be effective against us, personally]

I can prove it with an icepick under your left eye [lobotomy]. Ask Frances Farmer about that.

It's the brain we have to work for and with. if the instrument is defective (****** is an example you have to understand here) no amount of good spirit can affect a positive outcome UNTIL THE BRAIN, THE ETHERIC WEB, AND ALL THAT is fixed. This isn't dogma, this is metaphysical fact, taught to us no matter what degree we were or what the org was that trained us.

FACTOID
They need only enter your brain, and your good heart notwishtanding, YOU ARE theirs. I don't care how many lives of service you have or what your radiance factor is. Once they manipulate the brain on an ELF level,  you are f****d. And...that is your towers, so to say. It's the final trump card and they have it in full. Just stick around awhile...especially as winter approaches.

[Since these towers have a range of up to a mile or more, now might be a good time to dowse locations farther away the tower base than right up against the tower fence, since the minimum range of a HHg is about a quarter mile. Don Croft ]