Like most of you; we are not rich.  We cannot just build exactly what we want and where we want to and hire someone to do all the work for us. No suficiente dinero thanks to Bush and his 911 fiasco.  Even to allocate the time, labor, and funds we have to a small project like this was a major decision.  We have not made this decision lightly; especially considering the sacrifice in time it has cost us and we made it as a family based upon the consequences we would suffer if we did nothing. All family members have studied the issue and we all believe this Planet X thing is going to happen.  We don't really know when but the evidence available says this WILL happen. If it doesn't , that's great , we will certainly not be disappointed.  We'll just have an overbuilt storage area , extra groceries and water for a while; and we will be better prepared if some other disaster comes along. Which is another major reason for doing this. With the recent close passage of the NEAT comet to the sun, the coverups NASA displays on any incoming large object, it is apparent we are not going to be told of such impending disasters.  With the likelihood of nuclear holocaust breaking out somewhere in the world today, I feel a shelter of some kind and 6 months to a year of being able to live off the grid are minimum requirements for any family. We like our current meager lifestyle here and we like where we live very much; the quick mini's to the warm water beaches, the hot springs waterslide parks, finding great buys  in the huge fleamarkets, and we like our modest home we have worked on for the last 13 months very much.  But if Planet X does come, even if it's not exactly next May 15th; we don't want to be caught with our pants down. Our survival instincts have pushed the "desire to live" button. So we started preparing as soon as school let out last June, rather than wait until the last minute like many will.  Life is full of compromises and many decisions.  And, when it's a live or die decision, it certainly gets more attention.

In 2001 we decided to leave our home and farm  in beautiful rainy Washington state because we were at only 283' above sea level (the farm should be underwater when and  if the pole shift does occur), and I could see upcoming martial law as a reality in the not too distant future seeing where  the black ops side of our government was heading.  Yes, the concentration camps are real; yes, some people are already being sent there; yes the black helicopters and railroad cars with shackles in them do exist and yes the chemtrail spraying is all part of a population reduction program - see www.detailshere.com/concentrationcamps01.htm  www.detailshere.com/chemtrails.htm  and www.detailshere.com/fema.htm
And yes, the elite have burrowed underground with over 129 underground cities for protection from events like Planet X as well as a nuclear holocaust I assume.
See www.detailshere.com/tunnels.htm  for that story as well as a pic of the nuclear boring device that can bore 6.5 miles of tunnel per hour.   I felt it was time to get out of dodge before the gestapo and new world order was firmly in place.   Anyway, we ended up in a nice spot at 5130' with a temperate (70-80) climate all year round but the compromise is we are 125 miles from a live volcano, about the same from a huge dead one that may come to life with the pole shift, and about 200 and some miles from another live one.  If I had lots of money I would move another 125 miles inland to get further away from the volcanoes; plus we are in a valley that according to my E-Map GPS unit is 30' higher at either end than we are; uh-oh.   And I'm told by a geologist that earthquakes greater than 8.0 could create waveform undulations in the ground here; uh-oh. Life is so full of compromises. We've had some pretty heavy torrential rains here  the past rainy season (they all come at night or late evening and it's pretty the rest of the day - EVERY day) and the ground got pretty saturated  but no flooding.  Everything gets really green and beautiful though. Other places are setting record flooding conditions and wind damage and ice storms this year in Texas, China, Venezuela, the midwest, the east coast and even parts of Mexico.

We decided to build an 8' x 20' addition onto the backside of our existing home for a nice storage area if Planet X doesn't come and if it does come, for the pole shift that would withstand a good earthquake, 200 mph winds, and a meteor firestorm if that's part of the package and Planet X scenario.  Who knows how big the meteors will be that don't get burned up in the atmosphere.   But both bible prophesy (see www.detailshere.com/bibleprophesy.htm ) and those in the know say that's what may happen to the space debris dragged along with Planet X as it passes through the asteroid belt.  We dug down three feet and laid a foundation under the addition with big rocks and concrete and tied it in to the existing foundation sides and existing slab with rebar.  The addition has 8" thick concrete walls on two sides, 6" on the end attached to the house, and 12" thick on the most exposed wall. We finished the roof with a 10" concrete pour with a ton of rebar welded into it.This was all formed up and hand poured with a home cement mixer by us. Counting  sand, gravel, cement , steel rebar and boards we've only got  about  seven hundred dollars into this part of it so far.    The roof at 10" thick  has lots more steel in it to withstand small meteor hits as well as possible ash & lava cinder fallout if the volcanoes pop and we're upwind. We  have stocked in about a year's worth of grains, wheat, corn, beans, rice, sugar, salt, oil, canned goods, and water to be able to survive off the grid for a while.  The ventilation filtration system is next followed by solar panels and a bicycle genrator to charge 12 volt batteries.  The lighting system in the shelter can run on 120 volts or 12 volt light bulbs.

Is this going to work?  I don't know.  I'm not an expert in seismology, volcanism, or construction.  But it is our best compromise and attempt at survival with what we have to work with at this point in time.  I will keep posting new pics as we keep progressing including the woodstove addition, air filtration system, how we get water out of our big storage tank, gas storage, LP storage,etc. 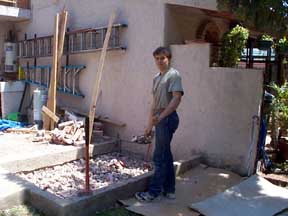 adding another 5'  to existing outside slab. Three feet deep; concrete, rocks, concrete, rocks, more concrete and rocks for mass and weight. This started out just to be a simple storage room addition. Then we had to get serious about X. 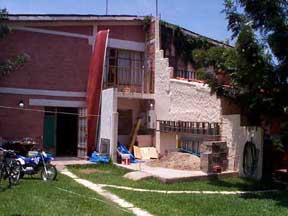 completed slab addition. If we weren't building this for a planet X shelter now, a simple 6" block or brick wall would have been plenty adequate for the storage area. 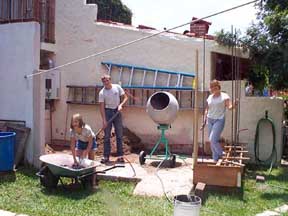 Building for survival is a family affair. First pour on the south wall. The cement mixer comes from Home Depot; about $350  - works excellent , holds a lot of material, and breaks down into three pieces for easy storage after you  clean up. 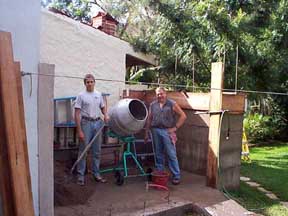 Aleks and Ber  pouring south wall which will be 7' tall. 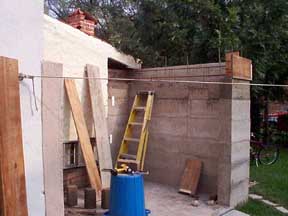 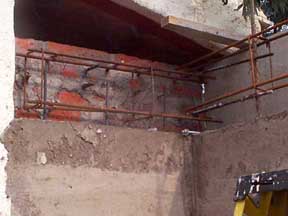