DIFFENBACHIA   Please read about this killer 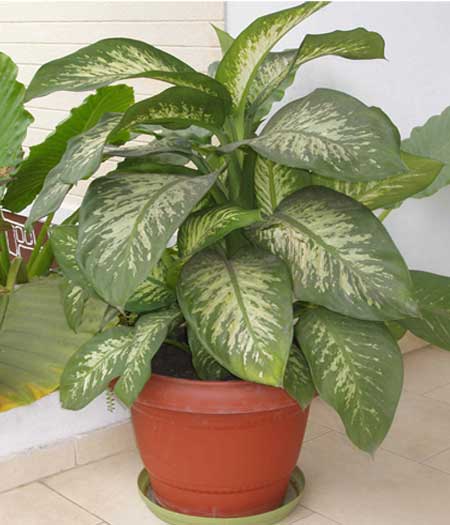 I received this warning in Spanish and this is my translation in English.
Basically this plant's sap can kill you, make you go blind, stop your breathing, or give you a heart attack.
The Amazon Indians use the sap of a broken stem to coat the tip of their arrows which kills the animal
or person the arrow is inflicted upon.

This  plant is very common in houses today. This pretty plant that you see in the photo, called diffenbachia,
is sold without warnings, as a decorative plant, but in reality it possesses one of the most powerful toxic poisons
in nature. It was introduced in Europe at the end of the 19th century and has its origin in the Central American
virgin forests and in South America, chiefly  Brazil. It calls attention by the showiness of its leaves, large and
brilliant, in which it alternates green and white colors. It is utilized as a houseplant to give an important decorative
addition to the home or office it is in. It is hardy and does not it require much attention, although one must be
very cautious since it has VERY toxic properties. The brother of the guy who sent me this article was fixing the
plants at his office and accidently broke a small branch of a diffenbachia similar to that of the photo above.
Somehow by a reflex action a small branch ended up in his mouth where the small piece pressed lightly
against his lips  for less than a second.

Immediately a burning sensation was felt in his mouth, spreading throughout his face... he ran towards the
bathroom and upon seeing his face in the mirror was terrified that it was completely purple.

The tongue swelled until it was much larger than its normal size.
The friend that was with him, took him in a taxi to the local clinic.
The journey to the clinic was more or less a half an hour. But with each moment he was in more and more
pain and it became harder and harder to breathe. There was intense pain in his respiratory tract. The
pain became unbearable.

His friend had the common sense to bring with them a piece of the plant to the clinic. They attended to the man immediately and gave him first aid and provided him oxygen to facilitate respiration and gave him medicines, corticosteroids to counteract the hyper activated bronchial. He was confined to Intensive Care because the
hreat existed  to suffer a cardiac arrest. They were some minutes of entubarlo. One of the lungs was
paralyzed and the interior part of the upper airway was filled with sores, along with his mouth also, and the pain
was so intense that not even the morphine alleviated it. I sought on the internet some data on this plant and
thus I was informed of the following: Its sap, that concentrates on the stem and near the stalk, has been
used traditionally by Amazon natives to poison the tip of its hunting arrows.
The simple contact of the hand on the eyes after its handling, can produce temporary blindness. It can cause the
death of a baby in little less than ten seconds. It can cause asphyxiation in little less than twenty minutes to an adult person. Never handle this plant without rubber gloves and in every case with extreme precaution.
WIKIPEDIA SAYS OF THIS PLANT Diffenbachia (known in El Salvador and in Costa Rica as Lottery, Dollar)
Precaution: the sap of this plant is poisonous. Avoid contact with mucous membranes and the eyes. Keep out
of the reach of  children. As it is so popular, it is worth while that the community know its natural characteristics
so that we can decide how much it is worth to have it as a decorative ornament, and if a simple accident, of
coincidental contact can cause death in a few moments, maybe we should be looking at other plant choices
instead.  Send this message to all your relatives and friends. This is a very common household plant.